6. The Wabbit disposes of the Box 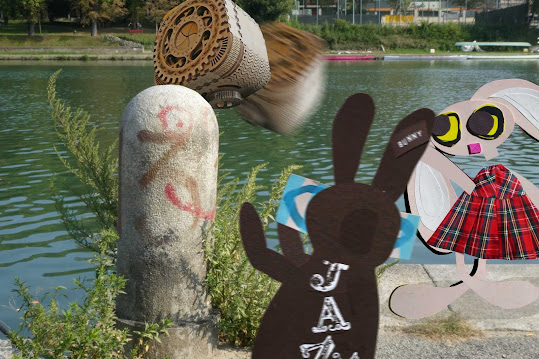 The Wabbit took the box to the river to get rid of it. On the way he met Lapinette, who wasn't aware of the story. "Oh, what a nice box," she said. "Does it open?" The Wabbit was aghast. "I'm getting rid of it," he yelled. Lapinette didn't understand so the Wabbit gritted his teeth. "It's jinxed," he said. "You should dispose of it environmentally," answered Lapinette. The Wabbit prepared to throw the box. "You can't dispose of jinxes environmentally. It's going in the river." The Wabbit always pronounced it rivaaaah when he was annoyed. "What kind of jinx is it?" enquired Lapinette. The Wabbit's arms came back as he prepared to jettison the box. "It's a pain in the neck, insect jinx," he said, "If I don't get rid of it, the thing will hang around." The Wabbit threw the box with all his strength. It summersaulted once and landed in the water. Then slowly it began to move down river towards Venice. Lapinette looked sorry. "That's a shame, it's a pretty box." The Wabbit put his paws on his hips. "Pretty is as pretty does." Lapinette watched the box. The waves lapped around it. "Whatever does that mean?" she asked. "I've no idea," shrugged the Wabbit. Waves swept the box back and towards the Wabbit. "Maybe the jinx has washed away," ventured Lapinette. Just then a voice came from the box. "I'll be back, and I'll get you, Wabbit!" Lapinette put her paws in the water and tried to wash it into the middle of the river. "What an unpleasant box." The Wabbit laughed. "So, will you take the money or open the box?" There was no hesitation. "The money," said Lapinette.