4. The Wabbit, Lapinette and Crazy Prices 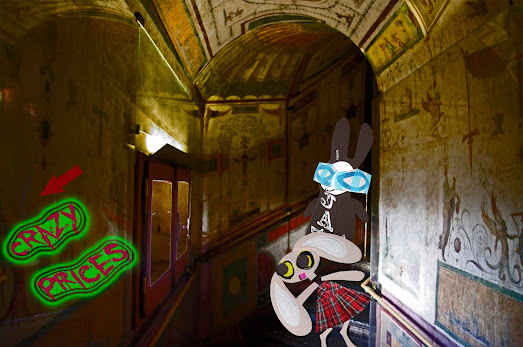 The Wabbit and Lapinette made their way down.  It was ornate but heavily faded and the stairway creaked and cracked with every step they took. Lapinette didn't seem to care whereas the Wabbit was amused. A stencilled sign flashed at them and the recorded voice started again. "Super crazy. Crazy crazy crazy. Every one of our prices is super crazy." Water dripped down the walls with a steady drip drip drip. "Thinking of buying something?" asked the Wabbit. "I won't know until I get there," replied Lapinette. The Wabbit smiled again because he usually had something in mind. The lights flickered and returned to life. "I was looking for a multi-headed electrical thing," said the Wabbit. The lights dimmed again. Lapinette didn't reply because she was ferreting. "Maybe a good set of tools to repair these stairs," said the Wabbit. "Tell the landlord," said Lapinette. She moved downwards into the gloom. The Wabbit followed on. They could see a large warehouse. It was filled with what the Wabbit could only describe as bric-a-brac and grotty tat. The Wabbit took one look and turned to go. "I've seen enough," he said. He hunched his shoulders and stuck a paw in his fur. "We've come this far," said Lapinette, "there may be something ultra valuable here." The Wabbit stifled a giggle. "We'll be rich beyond our wildest dreams." Lapinette bent to look at something. "What's this?" The Wabbit bent down to look - and at that moment the stairs collapsed flat and he tumbled the rest of the way. "That got me down," he said. "Stairway to heaven?" quipped Lapinette. "That's the other way," grumbled the Wabbit.