4. The Wabbit and the New Garibaldini 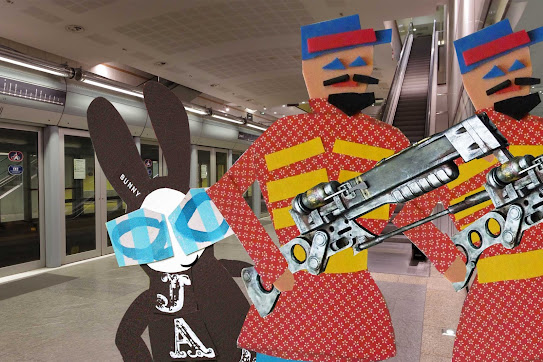 The Wabbit lost sight of the old soldiers for a while but he caught up with them on a metro platform. They were patrolling up and down with all the officiousness they could muster. The Wabbit noticed something. He knew they were supposed to be Garibaldini, but everything was wrong. Their jackets were way too flowery and their hats were not quite right. It was when he saw the rifles, he knew something was badly amiss. They were his own special issue Snazer guns and they were strictly restricted. He tapped a soldier on the back. "Who goes there?" enquired the soldier. "Commander Wabbit," replied the Wabbit. They snapped to attention and saluted. "I fear there's been an error," said the Wabbit, "Garibaldi is long victorious." "Good news," said one soldier. "Hurrah," said the other. "We have assumed this detail," said the first soldier. "We are patrolling the great iron railroad. Are you with Cavour?" The Wabbit shook his head, but he'd had an idea. "Did you perhaps come with the interior designers?" "We came in a van," said the soldier, "with a lot of strange stuff. Then we were left alone in an unfamiliar building." The Wabbit realised the Risorgimento remodelling of his offices had resulted in unintended consequences. "I'm having a little reception for the Revolutionary Friends of Torino," said the Wabbit, "so perhaps you'll join us for refreshments." "Will there be bagna càuda?" asked a soldier. "With cardooms?" said the other. The Wabbit was delighted. "Your authenticity is showing," he said.

[Bagna càuda is a hot dish from Piedmont]