The Wabbit at the Grand Adventure Caffè 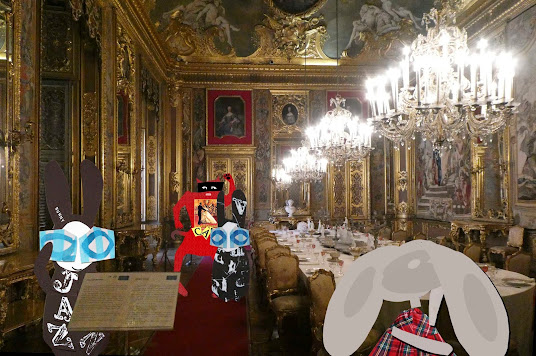 The Wabbit had arranged a special dinner for Lapinette but hadn't told her. He very much wanted it to be a surprise. So he alerted Wabsworth and Skratch. Together they persuaded Lapinette it was merely a boring talk on new protocols, but that her attendance was completely necessary. Then they laid out the table in the Big Dining Room at the Department. The menu was a fantastic one, containing everything Lapinette liked. The courses were too numerous to mention, but the menu started with devilled crab, then Carrots Royale followed by Jerusalem Artichokes a la Wabbit. There were more dishes than you could shake a stick at, separate drinks for every course and Lapinette's favourite tunes played on a sound system constructed to the Wabbit's own specifications. "Welcome Lapinette!" cried the Wabbit, "please be seated." Lapinette smiled and waved her paw. "You shouldn't have!" Skratch was waiting for his moment. "Please sit down and tell us what kind of adventure you thought we had." He drew out a chair and Lapinette sat down and spoke. "It was a system of signs predicated upon the perfect coffee," she said. "And I can safely say it was quite most hilarious compilation of sci-fi tropes I've ever seen." The Wabbit raised an eyebrow. Wabsworth launched in. "The coffee acted as a performative signifier, which itself pointed to a dislinkage between itself and the real world." Skratch laughed. "I can't say I disagree. We are all part of the theatre of images." The Wabbit wanted the last word. "Self-fashioned ones you might say." Lapinette chose that moment to rap on the table with a spoon. "Fashion me up a dinner!" "Certainly," said the Wabbit. "Let the Lapinette celebrations begin!"