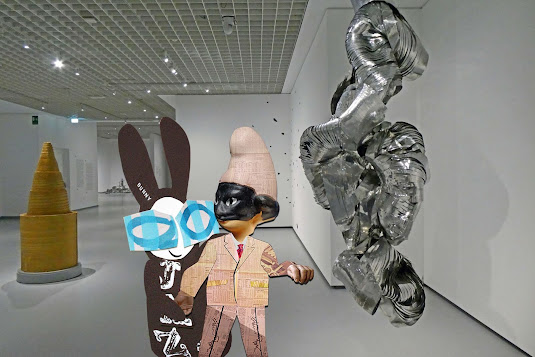 The Wabbit was hopping through the Gallery of Modern Art when he spotted someone he knew. "Pio!" he shouted. "Pio Pulcinella! I haven't seen you for quite a while!" Pio turned away from the piece he was studying. "Commander Wabbit," he smiled, "Pleased to meet you again." Pio was an ace economist and a follower of Michal Kalecki. If anyone knew anything about economics, it was Pio. "I'm glad I bumped into you," said the Wabbit. "My Dinosaur Fund hasn't been doing very well lately." The Wabbit's Dinosaur Fund paid for all the unofficial missions undertaken by the Wabbit. Pio frowned. "These are difficult times, Commander." He shook his head sadly. "Call me Wabbit," said the Wabbit. "OK, Wabbit, we'll meet and sort this out," said Pio, "But what exactly is the problem?" "Things are sluggish, nothing's moving," said the Wabbit. "I still suggest Intergalactic Government Bonds," said Pio. The Wabbit frowned. "Aren't they susceptible to Rebel Alliance Attacks?" said the Wabbit, "I heard that two space stations had been destroyed." Pio threw his head back and laughed, "You should be giving me advice, Wabbit." The Wabbit laughed too. "I was thinking of something that was a nice little earner, nothing too grand." "Nothing too grand and nothing too illegal?" responded Pio. "Heavens no," said the Wabbit. Pio thought for a while. "What brings you to the Gallery Wabbit." "Gives me inspiration," replied the Wabbit. Pio was direct enough. "Have you considered Art Investment?" The Wabbit's eyes flickered with interest. "It's not very liquid," said Pio, "until now that is." The Wabbit had the glimmer of an idea. He put a finger to his lips. "Let's meet in secure surroundings ..."