10. The Wabbit and the Great Return 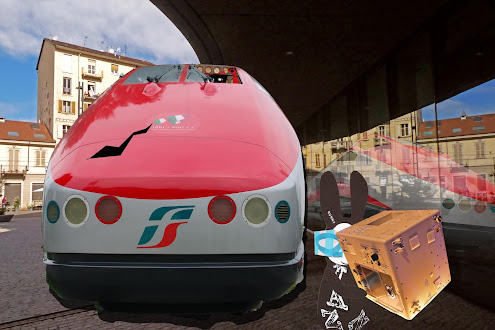 The Wabbit thought he had better return the coffee machine to the Lavazza Museum. So Quantum landed briefly outside and the Wabbit hopped out with the goods. "You worry too much, Wabbit," called Skratch from the Quantum's cabin. "I wouldn't feel happy if I didn't," replied the Wabbit. He lurched under the weight. The machine glowed slightly from all the radiation it had picked up in space, but the Wabbit paid it no attention. Quantum bore the scars of the brief battle with the alien vessel and had already complained bitterly. The Wabbit knocked at the door. "I brought your coffee machine back," he said. "It just took off into outer space - and me with it." The Duty Officer was puzzled and sceptical in equal measure. "We're not missing one. But I'll go and look." He went off, returning in an instant. "No, it's still there. And there's no parking here on the concourse you know." The Wabbit was dumbfounded. "What will I do with this then?" But he knew he would keep it. He turned and shouted to Skratch. "Have we got room for a second hand coffee machine?" Quantum wouldn't keep quiet. "Who cares? What about my paneling?" Skratch spoke in a soothing voice. "I might know a good yard where we can get it done cheap." "I want the best job," responded Quantum. The Wabbit hopped back to the cargo hold. "A bit of light grinding, sanding, filling and polishing?" Quantum sounded annoyed. "I want it back to as good as new. I insist on a new panel!" The Wabbit laughed. "Where's that engineering yard, Skratch." "It's so hard to keep track of them," joked Skratch. Back on board, the Wabbit reclined in the cab. "What was that for a sort of adventure?" Skratch held his sides in helpless mirth. "I think we're about to find out .."