3. The Wabbit and the Talking Art Exhibit 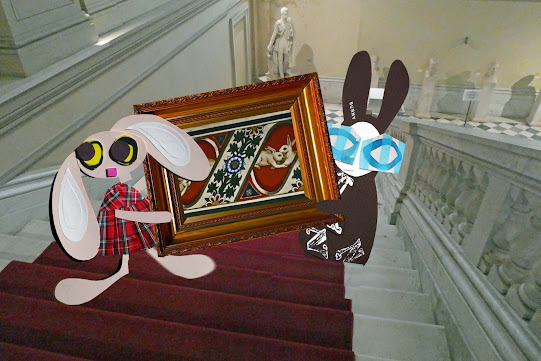 The Wabbit and Lapinette decided to start their project with some borrowed art, just to test the market. Bearing a painting adapted from a medieval fresco they mounted the stairs at the Department of Wabbit Affairs. They hadn't reckoned on the weight of the frame. "Phew," said the Wabbit, "art is hard work!" Lapinette was panting with the effort. "Maybe we should have started with a miniature." The Wabbit shook his head. "It's important to start as you mean to go on." But as they climbed the stairs the painting seemed to vibrate with every step they took. "Can you feel anything?" asked the Wabbit. "I can hear something," said Lapinette. They stopped and listened. "It's whispering," said Lapinette. The voices soon stopped, and they carried on. But suddenly they started again and this time they were louder. It was the rabbits on the painting. They were saying something. They started to sing. "Beware beware, better beware, on the steppy step steps of the oldy old stairs." The Wabbit wasn't astonished one bit. "I heard something like this before." Lapinette agreed. "I think we should listen because it's a warning." The rabbits burst into melodic tune. "Have you seen the ghost of the Bunny Man? Sits in the garden on an old tin can. If you see him, you'd better ask, just where did you put your bloody axe?" The Wabbit dropped his side of the picture and Lapinette followed suit. The rabbits fell silent. Lapinette pouted. "I thought we'd heard the last of the Bunny Man?" "He never lets go," said the Wabbit. "He doesn't exist," said Lapinette. "He is coming," replied the Wabbit, "and we are here."
at October 29, 2020