3. The Wabbit and the Spaceworthy Coffee 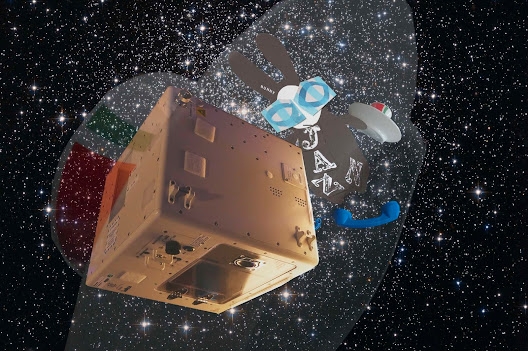 The Wabbit lost grip on the coffee and everything started to spin. He seemed to be enclosed in a giant espresso cup and they all whirled through space. The coffee had tasted good. Better than good. But now he'd separated from the cup and was forced to think about what had happened. "OK," said the Wabbit to himself, "Now I'm here and I'd better get out of it." He thought and he thought. "If only I could get a message to the team, they'd send help." The Wabbit searched in his fur for quite a while. Then he came across something he'd forgotten about. He's bought it in market and forgotten it and it looked like an ordinary blue phone - but it had special capabilities following the modifications he'd made with Big Blue Snail. It might just work. It might. He dug it out, but it floated off. For a while he tried to reach it. It was very elusive and finally he gave up and called out. "Blue Phone! Come here!" It floated towards him and mysteriously attached to the back of the coffee machine. Then he tried it. "Hello, this is the Wabbit here, come in please." The line was clear enough and he heard Skratch's voice. "Hello Wabbit, where are you? We're all having a bit of a coffee break here." The Wabbit sighed with relief. "I'm in outer space with a runaway NASA coffee machine. Please get me out of here." This met with uproarious laughter. He heard Skratch speak to Lapinette. "The Wabbit is having a joke!" The Wabbit lost his temper. "This is no joke. Please come and get me out of here and be quick about it." Skratch calmed down. "Which part of space are you in?" The Wabbit looked around. "I'd say it was the Milky Way." Skratch tried to suppress a giggle. "That's handy for your coffee." The Wabbit hissed. A pregnant pause ensued. "No pressure then? We'll be right there!" said Skratch.
at October 02, 2020