5. The Wabbit, Skratch and Space Coffee. 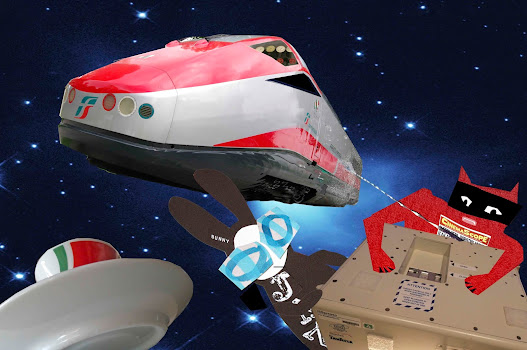 Skratch decided the Wabbit needed help with such a precious cargo. He spoke with Quantum. "I'm going outside to help." Quantum rumbled with mirth. "Don't forget your safety equipment." Skratch merely raised his eyes - and plunged from Quantum to make his way along the tether. "Hello Wabbit," he said. "Hello Skratch," said the Wabbit, "Give me a paw to guide this thing, it's awkward." Skratch fastened the tether to the espresso machine. "Running out of steam, Wabbit?" The Wabbit groaned. "Skratch, I don't really know how I got here." Skratch hefted the machine towards Quantum. "It's a nice bit of kit." The Wabbit made a face. "The sign at the Lavazza Museum said not to touch it." "Not as much as a red button?" meaowed Skratch. They sailed towards Quantum at a leisurely pace. Skratch was philosophical. "I suppose the important thing is, does it make good coffee?" "Ottimo," said the Wabbit. "Good as that!" answered Skratch. It was then he noticed the espresso cup. "What's that cup, Wabbit?" The Wabbit's head swivelled round. "It seems to go with it." The cup and saucer was following them. "Flying cup and saucer?" said Skratch. The cargo bay door swung out and they were sucked inside. "Let's get it up and running," said Skratch. They heard a rumbling from Quantum's engines as he swung round and headed for home. Skratch meaowed long and hard. "If I leave you alone for a minute, you won't get into more trouble will you?" The Wabbit looked offended. "I can operate a simple espresso machine." Skratch looked in horror as the Wabbit started to fiddle with the controls. "Now what does this knob do?" murmured the Wabbit.