4. Skratch and the Cream in the Coffee 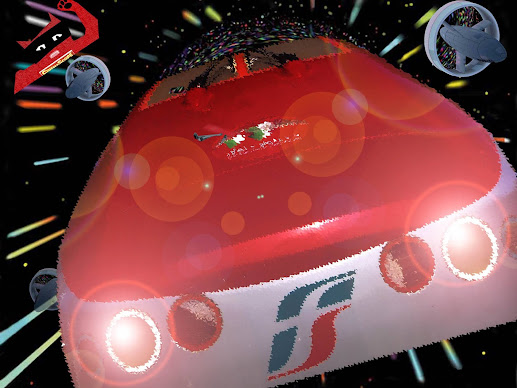 Skratch piloted Quantum the Time Travelling Train through space. The Wabbit had said he might be in the Milky Way and it gave him an idea. It was something to do with the coffee. He was looking for a barred spiral galaxy identified first by Herschel then by Shapley - and he couldn't help singing some rhymes that were to do with clouds. "I had some dreams," hummed Skratch, "and they were clouds in my coffee, clouds in my coffee." He spoke with Quantum. "Can you get a fix on these layers?" Quantum laughed. "I'm a Time Travelling Train with Lattice Drive." There was a flash and a bump, and they went through something. Other crafts went by as if in slow motion. "If he's anywhere he's near here," said Quantum. "Look for an espresso saucer shape", suggested Skratch. Quantum looped round. His voice boomed from loudspeakers. "Initiating contour search pattern." He searched for a while. "I can smell coffee," he said. "Can you smell in space?" asked Skratch. "I can," replied Quantum, but I don't recognise the brand." Skratch recalled something the Wabbit had told him about a new brand of coffee Lavazza were introducing. "Lay in a course, Quantum." By this time, Skratch felt like a coffee himself. They hurtled through space in Lattice Drive and everything shook. "We could do with a decent coffee maker, Quantum. Have we got any milk?" Quantum laughed. "I think there's some cream in the fridge." It was Skratch's turn to laugh. "In space, no one can hear you cream." It was such a bad joke that Quantum shuddered. Then he saw the Wabbit. "There he is!" Skratch threw a lever. "Opening Cargo Bay Two."
at October 05, 2020