8. The Wabbit and the Coffee Standoff 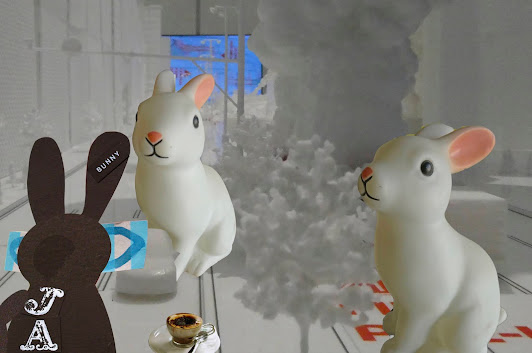 Just as the aliens had said, the scene was recognisable to him. It was recognisable but hardly realistic. There were two giant rabbits sitting in a street. There were fake cars, fake trees and fake buildings - but were the rabbits fake or not? It look like a Christmas tableaux and the Wabbit wondered whether the rabbits would light up too. He gently put the marocchino down. "One marocchino for you," he said chirpily. "How do we appear?" said a rabbit. "A teeny-weeny bit out of scale," replied the Wabbit. There was something he didn't like about the rabbits, something malevolent. They were too sweet - maybe a bit sickly. Their fur was too shiny. Their ears were too pink. What lay underneath the plastic exterior? They stood rigidly to attention and looked directly at the Wabbit. "Very nice Commander Wabbit," they said in unison. "Now we want your coffee machine." A silence ensued. "And we want your vessel." The Wabbit was already backing away. "All out of date," he said. "Totally antediluvian. Hasn't been updated for years and years." He reached the door to the corridor. "I'll just be going now," he said and tipped his forelock. The rabbits sprang and that was the moment when the Wabbit took action. He turned tail and did what rabbits did best. He ran for his life. The aliens looked like rabbits, but they couldn't run like true lagomorphs could. The Wabbit was through the hatch and on his way to Quantum the Train before they could say Bugs Bunny. He radioed ahead. "Prepare lattice drive, Quantum." The radio crackled as Quantum responded. "Did you say Lettuce Drive, Wabbit?" "This is no time for bad jokes!" shouted the Wabbit.