2. The Wabbit, Lapinette and Fine Art 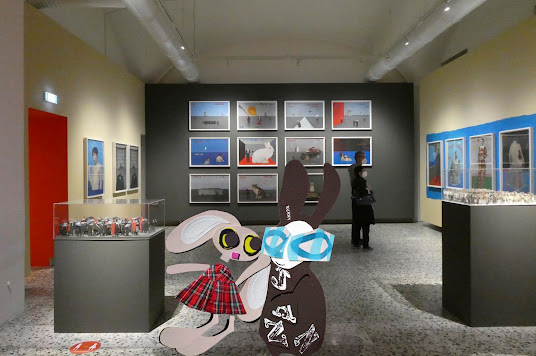 Lapinette was surprised when she met the Wabbit in the art exhibition. The Camera Centre was featuring the work of Paulo Ventura and she thought she'd just catch it. "Hello Wabbit, I didn't expect to find you here." The Wabbit jumped. He was contemplating the various exhibits for inclusion in his catalogue and was lost in thought. "Hello Lapinette, you're just the person I need to help me in my quest." Lapinette smiled. "What are you up to, Wabbit?" The Wabbit explained about meeting Pio Pulcinella and his suggestion for stimulating the Dinosaur Fund. "Oh!" she exclaimed, "that's quite an undertaking." The Wabbit stepped back and threw his arms wide. "I was thinking of including all artists who featured rabbits." "Would you include hares?" asked Lapinette. "Certainly, all manner of lagomorphs," replied the Wabbit. "Mmm," said Lapinette, "There's Durer, Chagall and Miro." "Of course," said the Wabbit. "And John Herring," said Lapinette. "Doesn't he do mainly fish?" said the Wabbit. "Horses," giggled Lapinette. "Well of course there's this fellow Ventura here," ventured the Wabbit. "He does Rabbits. I thought I'd get him to illustrate our catalogue." Lapinette thought for a while. "They're all rather expensive, Wabbit. Have you thought about how you're going to finance it?" The Wabbit hadn't thought about that at all, but he came up with a quick answer.  "A Crowdfunder on that Internet thing?" Lapinette nodded her head gravely. "Lots of small amounts from interested parties." The Wabbit became excited. "We'll launch it on the world wide web and it will go completely spiral." "Viral," groaned Lapinette.
at October 27, 2020