6. The Wabbit and the Spider Descent 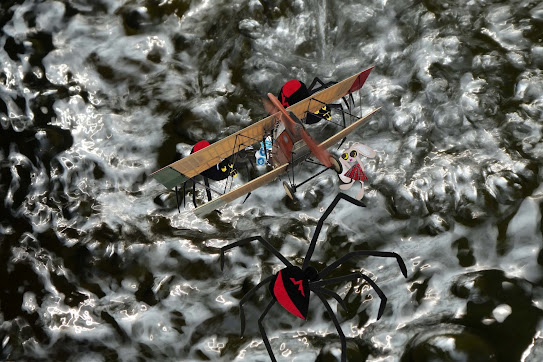 They materialised inside the black entity and coughed with the heavy pressure. Susan the Biplane kept her engines going but seemed to be standing still, stuck in the soup-like interior. Duetta and her two lieutenants flew in to protect the biplane. Legs rattled against the fuselage. Lapinette dangled from Susan's struts and she tried to climb back on board - but it was too much effort. The interior of the entity seemed vast. It stretched in all directions and heaved like a viscous sea. The Wabbit wrinkled his nose because the entity smelled like rotten eggs. The sulphurous atmosphere was just about breathable, but it made him queasy. He thought he'd better contact Duetta the Spyder by radio - but it was too much for him. Wabsworth tapped him on the shoulder. "Allow me, Commander." He grasped the radio. "Duetta do you copy?" Duetta flew under the fuselage. "Copy." Wabsworth could see her now and he leaned from the cockpit. "Any ideas. Marshal?" Duetta flew up close and rattled her legs. The entity's atmosphere responded by clutching them like a vice. Everyone gasped - all except for Wabsworth. His android construction fitted him out for most atmospheres. "It doesn't like that, Marshall," said Wabsworth. "What if you all crowd round and grab?" One by one, the spiders locked on to Susan's fuselage. "Can you take us down?" radioed Wabsworth. Susan came back online as they descended. "Systems are returning." Wabsworth smiled and thumped the Wabbit on the back. The Wabbit raised a paw and tapped a code on Susan's dashboard. Susan's intercom crackled. "OK Commander, we'll leave this thing a lovely present ..."
at June 01, 2020