5. The Wabbit and the Red Cloud Entity 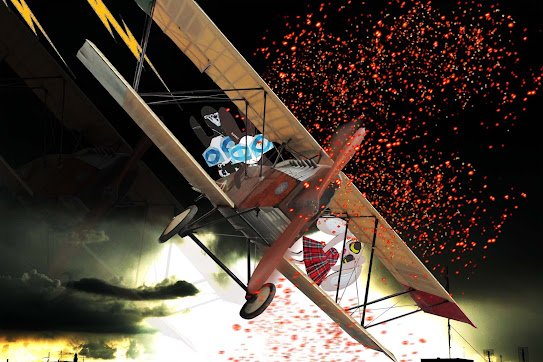 The Wabbit summoned Susan the Biplane and they took off for the big cloud. But when they hit the edge the propeller laboured in its dense atmosphere and the biplane began to wallow. "Switching to Interstellar Mode, Commander," said Susan. Things settled but not for long. Lighting pierced the cloud and hit the wings. Susan shuddered and rolled. "Here it comes!" yelled Lapinette. She grabbed the struts and hung like an acrobat. The cloud entity was like a swarm of bees - yet moved as one with a single purpose. It flew right through Susan as if she didn't exist. "Try speaking with it, Wabsworth." Wabsworth's all-being translator had a continuous update, but he wasn't quite sure with the entity. He tried anyway. "What is your purpose, entity?" Wabsworth listened to a series of squeaks and burbles then translated. "It says it's not a fish."  Lapinette sighed. "We said purpose not porpoise. Give it another go." Wabsworth hit the translator with a paw and spoke again. A long series of squawks and squeaks came in reply. Wabsworth clung onto the shaking biplane and shouted, "It says stand still or we will perish." Lightning crashed on the hull. The entity swarmed around the propeller. The Wabbit yelled back. "Tell it we're not the perishing sort." Without warning, Susan's propeller stopped dead and they began to drop. City streets loomed fast. "Quantum slipstream drive!" shouted Susan. There was no time to confirm. The craft appeared to dissolve under them, then they dissolved too. But the cloud was gone and so was the entity.  "Where are we now?" asked the Wabbit. "Middle of nowhere," said Susan. "At least I know where that is," smiled the Wabbit.
at May 29, 2020