8. The Wabbit and the Cloud Aftermath 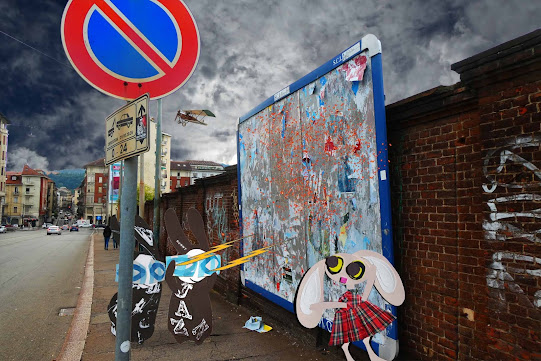 Susan the Biplane dropped them off and they were glad to be back. Out on the Big Bridge the team hopped and talked. The city was back to normal - normal as it ever was. The traffic wasn't much but it moved. Some people strolled along as if they had nothing else to do. The Wabbit looked at the advertising billboard and sighed. "There hasn't been a movie picture on this hoarding for ages. Just these scrapings." Lapinette looked at it. "Are you sure?" Wabsworth stared too. "Isn't that .. the red things from the cloud?" The Wabbit paid more attention. "You're quite right." Lapinette hopped up and down. "Maybe it's following us." The Wabbit dug deep in his fur with both paws and seemed to come up with nothing. But suddenly the tips of his paws lit up and appeared to throw lightning at the billboard. The red things coalesced and settled on the surface - somehow, they'd become part of it. Lapinette gaped. "How did you do that lightning?" "I collect things," shrugged the Wabbit. Lapinette pointed at the billboard. "So, what exactly happened?" Wabsworth had more than a clue about what had gone on. "The Wabbit's fur is an anti-matter weave. He captured the power of the cloud and harnessed it in his fur." Lapinette turned to the Wabbit and pointed. "That was serious performativity. But is it reversible?" The Wabbit grinned. "Oh yes, there's plenty more anyway." He flicked imaginary lint from his fur and they all turned to go. "Didn't Duetta Spyder say the cloud was sentient?" asked Lapinette. "Sentient is as sentient does," laughed the Wabbit.
at June 05, 2020