5. The Wabbit and the Phantom Island 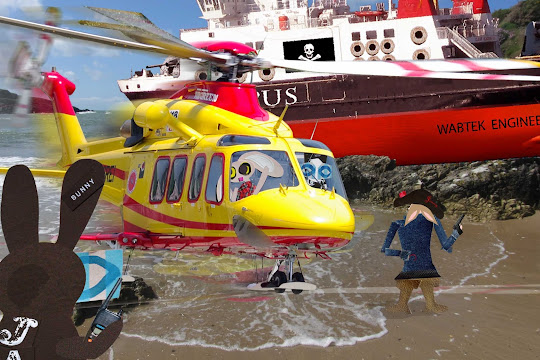 The Lepus was high and dry. Nothing would shift her. The island was fully formed now, with rocks and foreland. Waves kissed a sandy beach. "Maybe this really is my holiday," grinned the Wabbit. So followed by Jenny, the Wabbit clambered down, scampered across the sand and climbed a hill to get a better view. His ears pricked up at a familiar chattering and he checked the corner of the sky. "Lapinette!" He cheered. Below on the beach, Jenny fired into the air as a signal. Lapinette's helichopper swooped onto the island with speed and she set it down on the sand. The blades swished to a stop and for a moment there was silence. But the Wabbit spotted Wabsworth in the cabin and dug in his fur for his walkie talkie. "Wabsworth, did you find anything?" The radio crackled. "You Commander. Where is this place? It's not on the charts." "It be a phantom island," hollered Jenny. "I hope it's not thrice cursed," said Wabsworth. Jenny was getting tired of the same joke. "It'll be you who's cursed in a minute." Wabsworth and Lapinette strolled across the sand. Lapinette leaned down and scooped some up. "Maybe the island is synthetic." Wabsworth laughed. "Perhaps it's that ghost island that floats around collecting people and they all turn into ghosts for ever." Jenny wrinkled her face in horror then turned as she heard the Wabbit slid downhill in a cloud of dust and earth. "Maybe this is Love Island!" he yelled. "Eeek!" shouted Lapinette. She made a face. Sand scrunched under the Wabbit's feet as he loped towards her. "Let's scout inland." Jenny and started back to the ship, but she could feel the Wabbit staring in surprise. "I be going for the grog," she snapped.
at June 20, 2020