7. The Wabbit and the Kosi Counter Attack 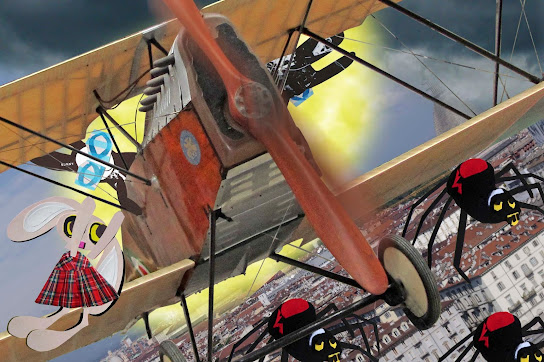 Away from the cloud, Susan the Biplane's engine burst into life and her propeller grabbed air. "Now Susan!" shouted the Wabbit. Just as planned, Susan released the Wabbit's secret weapon. Developed long ago in his shed, he'd called it Kosi and installed it in Susan's fuselage for emergencies. "What's that stuff?" yelled Lapinette. "A cunning mixture of potassium, oxygen and silicon," shouted the Wabbit. Wabsworth watched the gaseous stream penetrate the cloud. "Of course! It's a sulphur-based life form!" The Wabbit wrinkled his nose and so did Lapinette. "Hideous smelly cloud," murmured the Wabbit. Lapinette dangled her legs from a wing. "But how did it bring all the people to a standstill?" The Wabbit shook his head. "I think it induced some kind of devilish sulphurated stasis." Wabsworth looked back at the billowing cloud. "It must have been the Devil's perfume!" The Wabbit had never been certain why Satan smelled of sulphur, but Lapinette grinned and waved. "The Devil wears Sulphur!" Susan dipped her wings and swung across Turin. High above her, the black cloud lifted and began to thin out. Underneath, Duetta's spiders rattled their legs and kept formation. "I hope things are moving down on the ground," said Lapinette. "Got an appointment?" smiled the Wabbit. "Oh yes, smiled Lapinette, "I've an important meeting with a large gin and tonic."
[Lapinette is joking about a perfume called Sulphur. It is not known whether the devil ever wore it.]
at June 03, 2020