1. The Wabbit and a Busman's Holiday 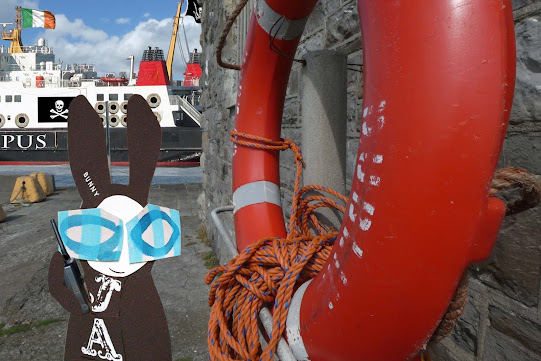 The Wabbit stood and breathed in sea air. He was on holiday and was on the dock of the bay as he called it, watching ships arrive and depart. This was the Dublin Great South Wall, a very long sea wall that extends from the Liffey into the Irish Sea. It was a brisk 4-kilometre hop to the Poolbeg Lighthouse, and he was on his way back when he thought he'd pause for a breather. The Wabbit was sceptical about holidays, because every time he took one, it turned into an adventure. It was a fine day, if a little chilly. Waves sparkled and gulls cawed. He leaned against the Water Polo Club wall, just beside a lifebelt, and wondered whether he'd ever enjoy a holiday. His ears pricked up. He could hear a familiar ship's foghorn - one that didn't belong to any container ship. "It's Jenny," he smiled. He dug in his fur for his walkie talkie, tuned it to the appropriate frequency and yelled. "Commander Wabbit, calling Captain Jenny. Commander Wabbit calling the Lepus." The radio crackled and Jenny answered. "No need to bellow, Commander. I can hear you without the radio." The Wabbit was delighted. "Where are you?" Jenny's voice had a pirate laugh in it. "Behind you." The Wabbit turned and gasped. "That was stealthy!" The Lepus was a retrofitted, armed ferry and she rolled and yawed on the Liffey swell. "Stealth is our middle name, Commander," crackled Jenny. The Wabbit waited for more. "The Department sent me and here I am," said Jenny. "Something's afoot," murmured the Wabbit. He saluted the ensign and shouted again, "Permission to come aboard, Captain."
at June 10, 2020