3. Lapinette and the Choppy Ocean 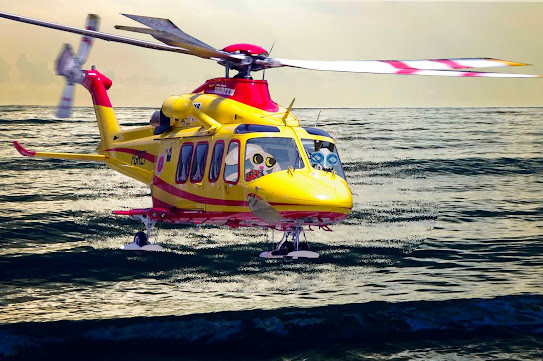 Lapinette kept her eagle eyes trained on the sea. But she hadn't the faintest motion what for, because her orders were so hush-hush they were only vague clues. She'd flown a long way but she rubbed her eyes and kept looking. Wabsworth was technically asleep. Of course, androids had no need of sleep. Wabsworth had decided he would run self-diagnostics - and so he arranged for an electronic dozing noise compatible with light to medium snoring. Lapinette heard him above the helichopper racket and smiled. The Lepus was making for roughly the same position but Lapinette had to keep radio silence, so she listened for ship's engines and scanned the horizon. Wabsworth woke up suddenly and looked out. "Where are we?" Lapinette shouted. "Somewhere in the Atlantic. Can you see anything?" "I'm not sure what I'm looking for." "No-one is," replied Lapinette. "I can see the sea," laughed Wabsworth. He performed an electronic scan, but nothing came up. He switched to manual view. "Isn't that something over there." Then he pointed and yelled, "Look there, the water is different." Lapinette dropped to sea level. Helichopper blades ruffled the surface until it threshed. "It could be a sunken island," suggested Wabsworth. Lapinette shook her head. "Too National Geographic." Wabsworth smiled. "I have a list of phantom lost lands." Lapinette dropped the helichopper a little more, but when she felt something tugging them, she throttled up and got some height. "I can hear the Lepus," said Wabsworth. Lapinette's ears were sensitive and she could usually hear a feather drop in a puddle. She laughed. "Your sleep did you a power of good..."
at June 15, 2020