4. The Wabbit and the Ghostly Galleon 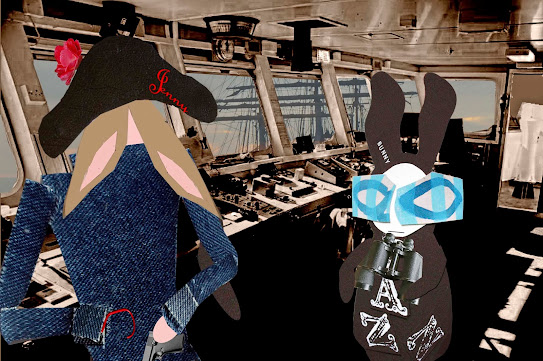 The Lepus searched without luck. "This is fruitless, " said the Wabbit. He tucked his binoculars into his fur. They were old and scarred but he'd never found better. Jenny looked the other way, "Behind you." The Wabbit did not turn but looked out the corner of his glasses instead. He screwed up his eyes. The result was the same and he shook his head in disbelief. "It be a ghost ship," said Jenny. The ghostly ship shimmered and vanished, then reappeared again. "Be it?" asked the Wabbit. He found Jenny's pirate talk to be catching. "Be it what we're looking for, then?" he added. Jenny laughed. "No, it be a warning to seafarers." The Wabbit shrugged his shoulders. "What kind of warning might it be." Jenny shrugged too. "The ghost ship be mostly unspecific." They stood for a while watching the ghost galleon come and go. Without warning the Lepus rose from the water and slammed down again. The Wabbit grasped on to the bulkhead. Jenny strode to the wheel. She looked at all her instruments. The echo sounder says we're aground. The Wabbit struck the bulkhead with a paw. "It must be the ghost ship. We're in the middle of the deep blue sea." Jenny shook head. "The echo sounder ain't much of a believer in ghosts." The Lepus lurched upwards again. Her propeller churned air and dripped water. The Wabbit looked out. But there was no ghost ship. Only dry land. "This be a phantom island," said Jenny. "Be it thrice cursed?" snarled the Wabbit. "Probably," nodded Jenny.
at June 17, 2020