7. The Wabbit and the Enchanted Castle 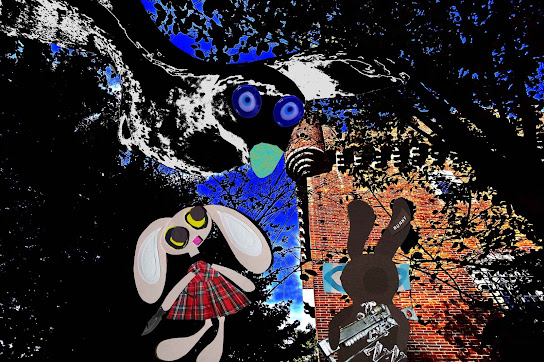 They followed the black dove far into the forest until they came to a castle with a big red tower. The dove swooped round it once and then flew close. It was no longer completely black. It subtly merged with trees and sky, all except for penetrating blue eyes and a colourful speckled beak. It cooed. "We're here, we're here." The Wabbit looked up but Lapinette tried to jump to reach it. "Where's here?" she shouted. "This is the enchanted castle," said the dove. The Wabbit grinned. He slung his snazer gun cross his back and held it there, guerrilla style. "What's enchanted about it?" The dove cooed quietly. "Not one soul has gained entry for five hundred years." Lapinette gasped. "How old are you then?" "More years than I care to remember," cooed the dove. The Wabbit pondered for a bit and shrugged. "Must be something hidden in there." The dove fluttered its wings. "Legend says that two souls will come who are braver than the rest. Only they will be allowed to enter the enchanted castle." The Wabbit grunted. "What else does this legend say?" This time the dove raised its head and let out a caw that that flew high over the trees and echoed from tower. "Inside there is someone to be freed, something to be kept and something ... " "Something to eat I hope," interrupted the Wabbit. His tummy rumbled alarmingly. "Something to eat and drink," added the dove. Lapinette plucked a salad sandwich from her frock, handed it to the Wabbit and nudged him. "I feel like a drink." The Wabbit's 28 teeth flashed as he ate "Let's get this rescue underway!" he yelled. "First you have to find the door," cooed the dove.
at June 24, 2020