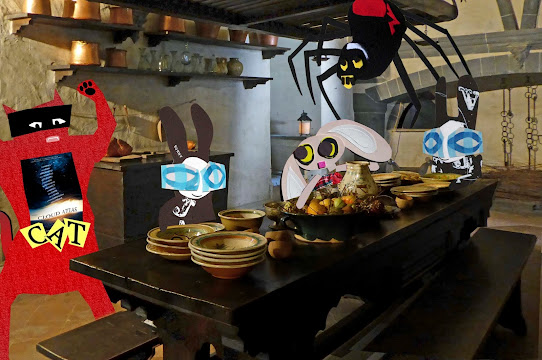 The team met at the Safe House and prepared for a hearty meal. Skratch arrived late as usual. He brought Marshall Duetta Spyder with him and she hung from the roof, hunting moths. The Wabbit heard loud crunching but ignored it. "Well," meaowed Skratch, "I'm here to tell you what kind of adventure you just had!" Lapinette rattled the plates with vigour. "Please go ahead, Skratch." Skratch leaned back and grinned. "It was a mystical adventure, thin in narrative, yet rich in spiritual consolation." Duetta crunched a moth down like a potato chip. "Clouds represent a desire for freedom." She rustled her legs. Lapinette flinched at the sound of the moth being digested. Wabsworth shook his head and launched his own explanation. "The narrative to which you refer is but a code of multiple enigmas. The reader receives this only as so much unimportant detail. It appears gratuitously natural." "That's Barthes," said Lapinette. She reached out to grab food, but it was fruit. She quickly put it back. "That's Barthes as interpreted by Julia Lesage," grinned the Wabbit, "As long as the reader is swept along by pseudo-psychological connections, they will be rewarded with the voice of truth - and that is why it's mystical." Skratch purred. "The connections arise from the semic code, mobilised through images. They constitute the key emotional sub code and the main units of connotation." The Wabbit rattled the plates and crashed them together. "I'm contributing my own seme - noise. Decode that!" Lapinette laughed and laughed. "We're hungry! Where's the food?"
[Julia Lesage: S/Z and the Rules of the Game in Movies and Methods Volume 2. UCP Press, London, 1985]
at June 08, 2020