6. The Wabbit, Lapinette & the Giant Bird 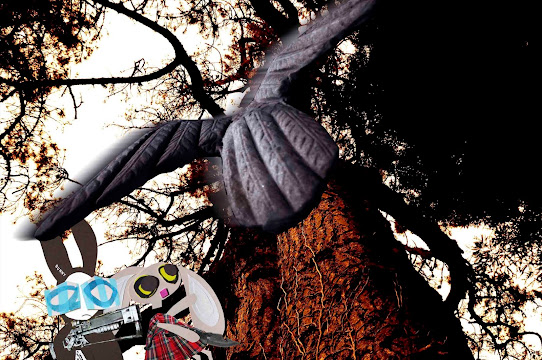 Jenny and Wabsworth stayed with the Lepus to try and float her. The Wabbit and Lapinette ventured inland to reconnoitre. The headland gave way to a wood then a dense, dark forest. Going was difficult. Strange sounds filled the air. Every tree seemed like a creature with insect tendrils that poked at their faces. Leaves crackled underfoot. Windy gusts blew up from nowhere and tugged at their fur. "A life in the open air," muttered Lapinette. "Just what I need for my holiday," replied the Wabbit. Creatures crashed in the undergrowth. Birds whooped from treetops. The Wabbit kicked his way through dead branches. Lapinette flitted over them. "Caw caw! caw caw!" The call came from overhead and to the east. The Wabbit snorted. "What is this? Edgar Allen Poe?" Lapinette pointed. "It's getting closer." A wind flattened their fur and whatever light existed dimmed in a moment. Giant wings spanned the forest as a massive black dove swooped down to hover just above their heads. The Wabbit flicked his snazer into life and its gentle hum joined the forest repertoire of creepy sounds. Lapinette's edged weapon made no noise at all, which was why she liked it. Her grip on the hilt seemed careless, but the knife was ready to fly. She ran a paw along the blade and made a clicking sound in the back of her throat. Branches bent back as the black dove flicked its enormous wings and soared into the sky. Then it flew back and called three times. "Caw caw caw!" "How do you do that?" asked the Wabbit. "Practice," said Lapinette as they followed the bird.
at June 22, 2020