4. The Wabbit and the Grouchy Sea. 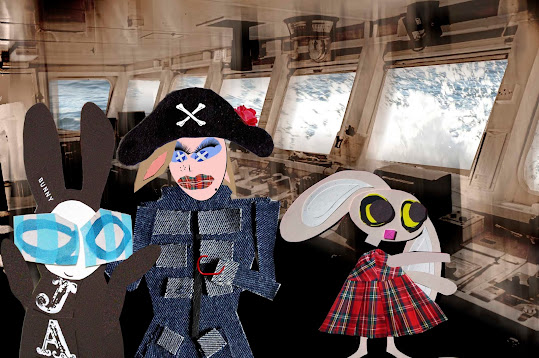 The Lepus sailed at dawn despite the conditions. The Lepus pitched yawed and rolled and for once Lapinette seemed happy. The Wabbit looked across. "The tablets I gave you are working!" Lapinette laughed and inspected the controls. "Which button is the Stealthicator?" Jenny grunted. "On your right. You can press it if you like." Lapinette jabbed it. The Lepus shimmered and Lapinette saw the bow vanish. Jenny grunted again. "The Wabbit made a modification. Want to try?" Lapinette's smile turned upside down, but she said. "OK." The Lepus shimmered again. Now Lapinette was looking at the bow of a sailing ship. "Nice," she breathed and made it vanish again. The Wabbit waved his paws wide. "I can do a tug, a pilot ship, an oil rig and a tea clipper."  That's handy," acknowledged Lapinette. She batted her eyes. Waves crashed against the windows. The Lepus shuddered. "Where are we headed?" gulped Lapinette. Her eyes moved to the back of her head. "We be seeking the Akwat breeding grounds." said Jenny. She rolled with the ship. "If indeed they exist," added the Wabbit. He looked at Lapinette. She was beginning to look green. "Have another tablet," he suggested. Lapinette knocked back another tablet and stabilised. "So where are the grounds?" Jenny squinted. "They're said to be in the Sea of Complaints." Lapinette giggled for quite some time. "Is that why we brought the Wabbit?"