10. The Wabbit and the Polluted Pond 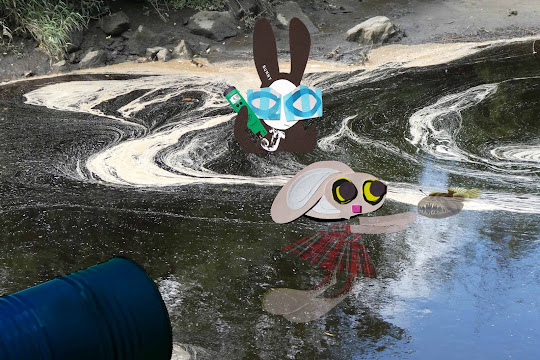 The Wabbit and Lapinette inspected the river until Lapinette pointed and shouted "Look!" A noxious scummy sediment swirled on the surface and clung to the bank. The Wabbit didn't hesitate. He searched his fur and from some dim recess plucked a strange meter. Then he plunged into the river. Lapinette wrinkled her nose but she plunged in too and swam towards something that floated half in and out of the water. It was a baby Akwat. She poked it. "It's quite dead," she shouted. The Wabbit took a water sample and pressed a button. The meter whirred. Then it rang and its monitor flashed information. He gasped and Lapinette looked round. He beckoned and she swam towards him. "The water's full of oxazepram," he said. His brow wrinkled and he shrugged. "Pam," corrected Lapinette. She tried to recall something. "I've read about this. The waste makes timid fish aggressive." The Wabbit laughed. "Good thing you went to that nature night class." Lapinette suppressed a scowl. "It was full of nerdy nerds." Her ears pricked up and she turned. "Something's dripping." The Wabbit gasped again. It had been hidden by branches but now the canister on the opposite bank was obvious. It was leeching pharmaceutical waste into the river. "We'll send a clean-up squad by helichopper," said the Wabbit. "OK. Let's get out of this polluted place now," replied Lapinette. She scrambled up the bank and looked back to the Wabbit. He was still in the river and he grinned. "I was getting to like it."
[Information on pollution and change in fish habits]
at March 18, 2020