1. The Wabbit and the Falling Droplets 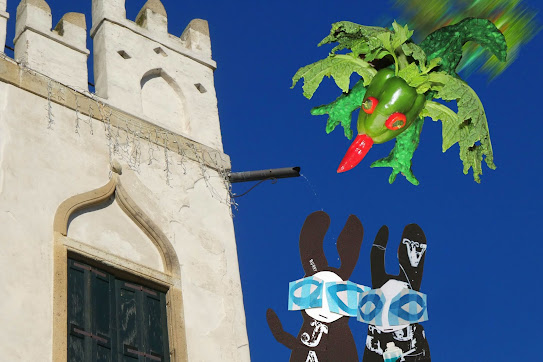 The Wabbit and Wabsworth, his android double, were on a bit of a constitutional. The sky was the most beautiful winter blue but a sharp sun filtered through, giving warmth to their fur. "We can be Kings of the Castle," said Wabsworth. The Wabbit smiled. "Strictly speaking it's a villa and it used to belong to dragons." Wabsworth's circuits whirred. "I thought dragons were more the cave type."  The Wabbit shrugged. "Even dragons want to be legit." He caught a flash of light from above his head so he looked up and squinted his eyes. Then he heard a roar from the sky. "Get out the way, Wabbit!" shouted Terni the Dragon. "Shouldn't you be in Rome, Terni?" asked the Wabbit. He deftly dodged drops coming from a pipe. Terni dropped lower and lower and roared, "Whatever you do, don't get any of that on your fur." "Any of what, exactly?" The Wabbit could very dense on occasions, but Wabsworth was on the ball and he pulled the Wabbit away from the drops. Terni landed with a considerable thump. His peppery nose breathed fire. "These drops can turn you into a dragon and not a very nice dragon at that." Wabsworth looked curious and pulled a flask from his fur. "Bad Dragon Drops?" He stretched out a paw and collected drops until the vessel was half full. "I'm going to test these in my laboratory." The Wabbit raised an eye. "Are we going into the Bad Dragon breeding business?" Wabsworth smiled in a malicious way that the Wabbit had noticed before. Terni breathed fire again. "Thinking of sowing a few Bad Dragon's teeth?"
at March 25, 2020