9. The Wabbit and the Akwat Children 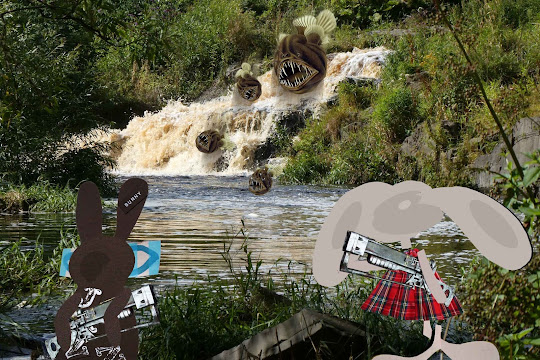 Following a track made by the Strige, Lapinette and the Wabbit found themselves at a river fed by a waterfall. Lapinette gestured for quiet. Above the sound of cascading water, they heard anguished wailing. They waited. From the top of the waterfall, three small Akwats tumbled down the rocks and into the plunge pool where they floated on their side, flapping and gasping. A larger Akwat looked helplessly over the tip. Lapinette lay down her snazer gun. The Wabbit did likewise and they both bent to look. "They're sick," said Lapinette. The young Akwats gasped on the surface of the water. The Wabbit shook his head. "I have antibiotics, but they're back at the ship." Lapinette looked at the woods. "I know some varieties of mushrooms that might work" The Wabbit reached out for an ailing Akwat and drew it towards him. "Go hop around, I'll do my best." Lapinette disappeared into the woods. The Wabbit took an Akwat by the gills and moved them around. When it started to soften, he reached out for another. The Akwat mother drew closer and watched. "No time to lose," said the Wabbit and he nodded in her direction. He grasped the gills of the last Akwat and moved them rapidly. The fish came around and escaped from his grasp. "You don't look as if you need any help," said Lapinette. She set down a variety of fungi and ground them beneath a rock. Together they distributed the medicine in the pool and watched the water bubble as the Akwats ate and played. "Maybe we're in the wrong job," laughed the Wabbit.
at March 16, 2020