6. The Wabbit and the Akwat Attack 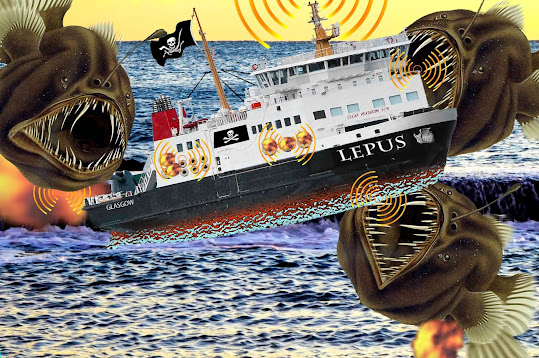 The Wabbit's music boomed over an empty sea and for a while, that was all there was. But the sky turned yellow. The waves took on a strange, ultraviolet hue. A layer of rock thrust up from the water, catching the keel of the Lepus, which threatened to capsize. Water coursed everywhere. Jenny turned on the Wabtek device and the Lepus lifted. For a moment the ship lay stranded along the rock. The Wabbit turned up the volume but it made matters worse. The Akwat creatures seemed to enjoy the music and their jaws clamped round the Lepus from stem to stern. The Lepus groaned in pain. "Kill the music, Wabbit!" yelled Jenny. The music died as the ship's giant cannon swung round the stern until Jenny got a bearing. "Fire!" she yelled. Shrieks rent the air as the reminder of her cannons fired port and starboard. Akwats plunged threshing into the water. Now the Lepus hovered, but an unknown force drew it back. Jenny let the Lepus drop with a mighty splash and signalled for full ahead. The Wabbit lurched across the bridge and hit the foghorns. The mournful sound carried across the waves and remaining Akwats moaned with them. One by one they dived under the surface and disappeared. The Lepus headed for the horizon as fast as her engines could take her. "That was close," muttered Jenny. The Wabbit peered at the surface. "They're following." He sounded the foghorns again. The Akwats fell back, but up ahead he could see a swirling mist which quickly thickened to pea soup. "We summoned our own fog," sighed Jenny.
at March 09, 2020