5. The Wabbit in the Sea of Complaints 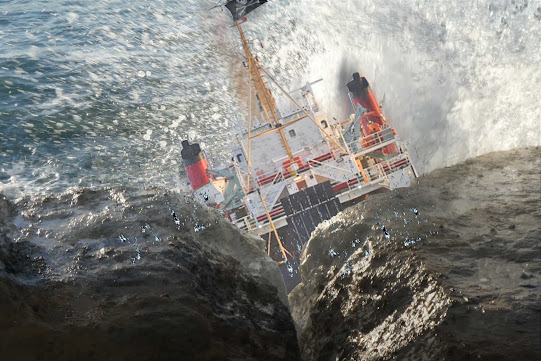 An impenetrable barrier bounded the Sea of Complaints. All looked lost until the Wabbit's Wabtek technology enabled the Lepus to fly over the barrier like a salmon leaping back to the spawning grounds. But the Sea of Complaints lived up to its name and the Lepus tossed and turned in violent waters on the other side of the barrier. Lapinette retired to her quarters and buried her head in her bunk. Even the Wabbit turned green. Captain Jenny gritted her teeth and spinning the wheel to and fro, she urged the Lepus forward. Soon they left the barrier far behind and the Wabbit breathed a sigh of relief. "I hope the Akwat fish are here after all that bother." Jenny smiled. "What bother was that, Commander?" Now the Wabbit could hear the thrum of the engines and his stomach settled down. The Lepus cleaved a path through a calm sea leaving a clean, shapely wake. Lapinette appeared from her cabin. Her face was no longer lime green, but had faded to the colour of young asparagus. She tried to sound chirpy. "Any sign of the fish?" The Wabbit shook his head and fished in his fur for electrical bits and pieces. Then he vanished below to make ready the soundbait. Lapinette heard him warble a song. "Gone fishin'. Put a sign upon my door." Amplifiers rasped out a crackly version of the ancient classic, recorded by the Wabbit himself. Lapinette covered her ears. Jenny leaned across. "What key is the Wabbit singing in?" "The key to Hell," grimaced Lapinette.
at March 06, 2020