8. The Wabbit and the Malignant Myth 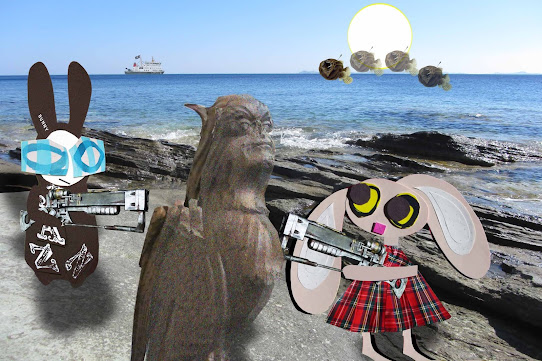 The shape shimmered and became opaque. Between a human and a bird, it perched on a rock nearby. Lapinette pointed her snazer. So did the Wabbit. A yellow sun lit the sea and in the distance they saw Akwats leaping across it like dolphins. Waves crashed soundlessly on the rocks.  "Complaints?" asked the shape for the second time. Its voice was treacle. Mutated wings fluttered. Feet skittered on the rocky outcrop. "Are you a mythical Strige?" said Lapinette. The shape nodded gravely and asked, "What is the nature of your complaint?" Lapinette waved her weapon at the sea and snarled. "We're complaining about these Akwats." The Wabbit growled. "Why are they here?" The Strige's face twisted into what must have been a smile. "They came to complain about you." The Wabbit gasped. "The cheek of it! What are you going to do about it?"  The Strige cackled. "You wish me to touch them with my evil wing?" The Wabbit wasn't happy. He poked the Strige with his gun. "What would happen?" The Strige shimmered and nearly vanished. "They'd rot." He reappeared again and Lapinette hopped forward. "They're bad enough already." The Strige whirled round and screeched at the Wabbit. "I can make you into puppets." "You can't," yelled Lapinette. The Strige whirled back, but the Wabbit yelled, "You're a has-been bird." So did Lapinette and they chanted, "Has-been, has-been, has-been!" The Strige whirled so much it bored a hole in the rock and dropped in. "The bird has bolted," laughed the Wabbit.
[Thanks to : Classical Culture and Witchcraft in Medieval and Renaissance Italy Marina Montessano]
at March 13, 2020