3. The Wabbit and Jenny on the Docks 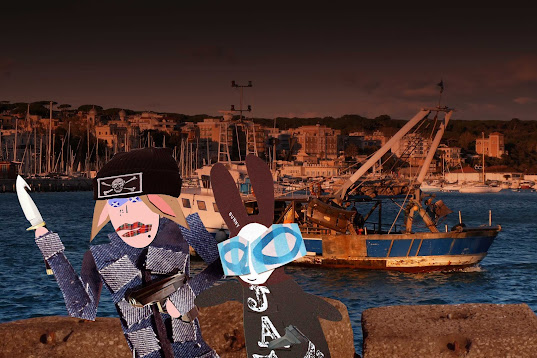 "Boo!" whispered the Wabbit. Jenny didn't turn. "I can see you Wabbit." The Wabbit smiled. "Need an extra gun?" Jenny swayed as a pirate should. "Quiet, Wabbit me hearty. I be in disguise."  The Wabbit looked all around. There was hardly a soul in sight. He shrugged. "Looks like it worked." The both sat on the wall. Jenny nodded to the fishing boat. The captain gave her a wave. "I got a lift," she winked. The smell of fish was overpowering and the Wabbit thought about dinner. His tummy rumbled. "What's happening?" he asked. "The Akwat fish be proliferating and we don't know why," said Jenny, "They're becoming a menace." The Wabbit waited for more. "They be troublin' the waters, and they be as bent a barrel of fish hooks." sighed Jenny. The Wabbit resisted a grin. "What's their problem?" Jenny swayed even though she was sitting. "They be in league with some others. They be holdin' us to ransom." "Bigger fish?" asked the Wabbit. "Aye, and they should fry," sneered Jenny. The Wabbit thought for a long time. "Then we have to flush the big fish out. Let's lay a trap." Jenny growled and giggled at the same time. It was one of the most threatening sounds the Wabbit had ever heard. "Like that trap music my cook listens to?" The Wabbit looked delighted. "Exactly. We'll trap them with sound. What's their auditory weakness" Now Jenny laughed long and hard. "Stridulation?" The Wabbit cackled in a pirate accent. "A simulation stridulation stimulation..."
[def:  stridulation: sounds made by animals and fish by rubbing certain body parts together.]
at February 28, 2020