7. The Wabbit and the Isle of Complaints 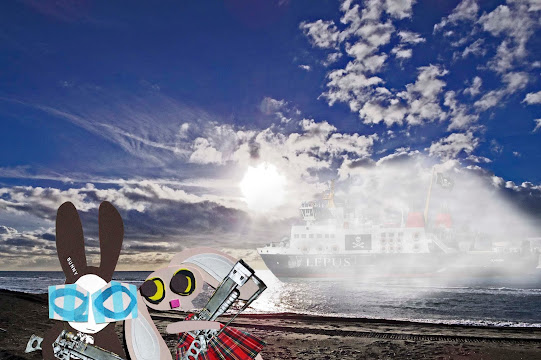 Followed by the Akwats, the Lepus coasted through the fog - but the fog was entirely its own. Land loomed quickly and Jenny threw the Lepus into Emergency Astern. There was a splash as she let the anchor drop into the sea. It was just in time. The Lepus scraped sand and gravel. The Akwats quickly vanished. "Nothing on radar," growled Jenny. "This place doesn't exist." The Wabbit and Lapinette strapped on snazer guns and dropped over the side. "It seems solid enough," said the Wabbit. Murky water washed across his legs and splashed upwards on his face. "Stupid wet gravelly island," he grumbled. Lapinette suppressed a laugh. "Then this must be the Isle of Complaints." Her voice was muffled and there was hardly a sound as they made their way up the beach. No wind, no birds, nothing. The Wabbit scuffed the beach, picked up a rock and threw it in the sea. It skimmed and bounced along the surface with no noise. He shouted and yelled. Lapinette shook her head. She could hardly hear a thing. She leaned close and screamed in the Wabbit's ears. "The island absorbs sound." He gripped her by the paw and together they moved inland. He stopped with a jerk. "I can feel movement." He looked straight ahead. Lapinette could see nothing. "Show yourself," said the Wabbit. Directly in front, the air shimmered as if it was rising from hot tarmac. A vague shape emerged and a quavering voice spoke. "Have you brought me any complaints?"
at March 11, 2020