6. The Wabbit, Lapinette and Black Mass 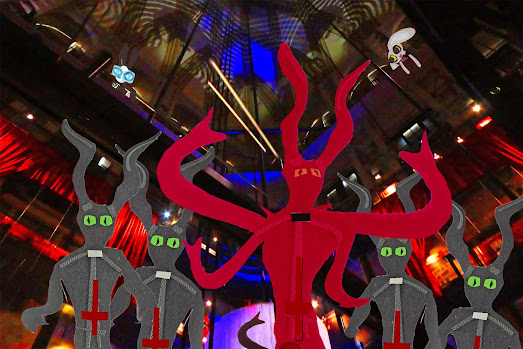 It wasn't too hard for the Wabbit and Lapinette to follow the sound of cloven feet through the dank hallways. Suddenly they were looking down on a vast cavern decked out with all manner of Satanic paraphernalia, "I don't like the look of this," said the Wabbit. Lapinette wrinkled her nose as together they ducked out of sight to watch and listen. Serried ranks of Satanic rabbits marched into the hall. "All Hail, Rabbit Satan!" they yelled. They drew back into two groups as the Grand Master arrived. He was huge and red and altogether unpleasant. He beckoned a Satanic rabbit to come unto him and he hissed in his ear. "You failed to dispense with the rabbit priest that sought to reveal our plans of domination!" The Satanist cowered back. "We pushed him from the parapet, your Imperial Vileness." "He was stone dead," said another. "Dead as a dog that lieth in a ditch," nodded another. The Grand Master roared with fury. "Yet this dead priest sends emissaries to break our balls." He held up his arms and roared. "Find them!" The Wabbit wanted to snicker, but his body convulsed into a sneeze. He tried to smother it by holding onto a railing - but the railing snapped off like a dry twig. The Wabbit tried to grab it but it spiralled down, grazing past the Grand Master's head. "Get that Waaaabbit!" yelled the Grand Master.
at October 09, 2019