9. The Wabbit and the Devil's Door 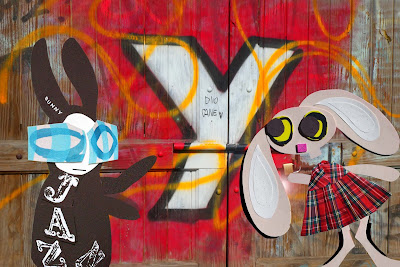 Safely out of sight, the Wabbit and Lapinette stood with their back to a door. "We need to set a trap for the Rabbit Leg Cult," panted the Wabbit. He knocked on the door just for fun. It made a hollowed out empty sound. "So what attracts a Satanist?" mused Lapinette. The Wabbit didn't have to think. "Hedonism, transgression, energy, and power." "This might the Devil's Den," said Lapinette. She too knocked on the door. She wrinkled her nose. "It smells of mould and sweat." The Wabbit looked at it with more suspicion than a scrap yard dog. "Aha! Definitely where these devils diddle." Lapinette's eyes twinkled. "Let's have a look." The Wabbit stepped back. "Do you have a twenty sided dice?" "Not with me," grinned Lapinette. The Wabbit shook his head in disappointment, then span around three times. "Hocus pocus, a plague of locusts. Bim Bam Bom. Open sez me." The door stood where it was. His face fell. "That was my best spell." Lapinette smiled and bowed. Then she unhooked a padlock and slid back a bolt. They heard a voice. "Who goes there?" "Just us mice," said the Wabbit. "Dio Cane!" said an angry voice. "Just advance warning for the Satanist's Rabbit Leg Ball," yelled Lapinette. She nudged the Wabbit and announced directions. "Bring your friends!" shouted the Wabbit.
at October 16, 2019