3. The Wabbit and the Rabbits' Whispers 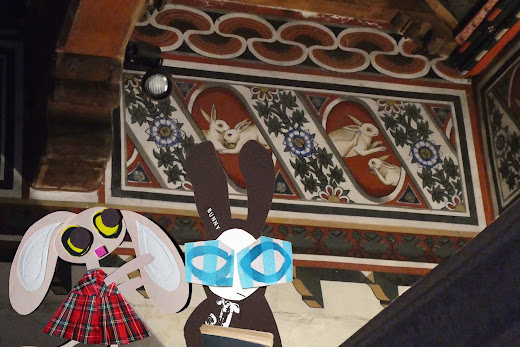 Followed closely by Lapinette, the Wabbit hopped through the castle. He was deep in thought and so he didn't hear the whispers. Lapinette did and she stopped and pointed. "The rabbits spoke." The Wabbit turned and looked up at the frieze. The rabbits were moving and their whispers were musical and tender. "Start with a coffee," sang one, "Coffee on the hill." "Make ours frothy," sang another, "Frothy if you will." The rabbits became silent and still. The Wabbit waved the priest's bible at the rabbits. "Is it in here?" Lapinette sighed. "Wabbit, there's no mention of coffee in the Bible." The Wabbit stared at the rabbits for a while as if they might come to life. "Then it must be a cryptic clue. Think crosswords." "Coffee on the hill," suggested Lapinette, "frothy coffee on the hill maybe?" Now the Wabbit was getting into gear. "Frothy coffee on the mountain?" Lapinette thought very hard. "Cappuccino on the mountain?" The Wabbit threw the bible in the air, caught it and slapped it with his paw." "Monte die Cappuccini!" Lapinette gasped. "That's where I first met the priest. He was coming down the hill. I gave him a lift." The Wabbit roared with laughter. "That's what coffee does." "Well, let's go," said Lapinette. They set off down the steps, but the rabbits whispered again. "Beware of the Foot Cult, beware, beware." The Wabbit raised a paw in farewell. "Got time for a coffee, Lapinette?" Lapinette bounded down to the courtyard. "There's always time for coffee, Wabbit."
at October 02, 2019