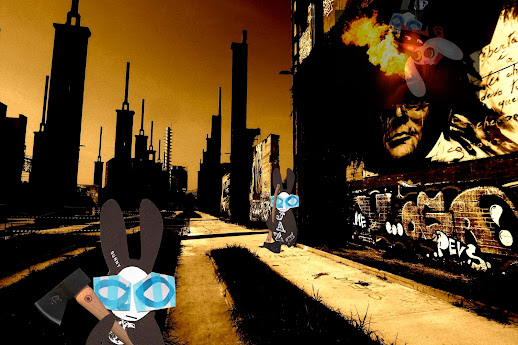 The Wabbit turned up slightly early for his Hallowe'en get together. This time he was ready. He'd brought his axe and a small gizmo that made his voice warble. He decided to practice. "I aaaam the Bunneemaaaan!"  His voice echoed across Pluto Park in a very spooky manner. The echoes died away. He ran his paw across the axe blade. It was suitably blunted for the occasion and presented little danger. "Bunneeeemaaaan!" The voice came from behind the Wabbit - and even though he knew it might be a trick, his blood ran cold. He decided to play along. "No! I am the Bunnyman!" he yelled and he turned. But there was his doppelganger, dumping the axe head on the ground. Up and down it went, making a hollow rapping noise on the concrete. The Wabbit drew a breath. He wished he'd brought a sharp axe, but reached for his automatic instead. It wasn't to be found and he cursed. Way above his head and deftly hidden in the mural, Lapinette stifled a giggle. Skratch dug her in the ribs. He meaowed softly all the same and Wabsworth sniggered. The Wabbit's ears twitched. "I smell a rat," he said firmly, "That's a cardboard cut out!" But with a sudden lunge his double tore towards him. The Wabbit turned to run, but he lost his footing and fell. That was when his tormentors took pity and came down from their hiding place. But the double's eyes flashed and the heavy axe smashed down. Lapinette gasped in horror. A shot rang out. The double dropped. The Wabbit picked himself up and tucked his automatic into his fur. "Good working model," he said. "That's not our model," said Lapinette. "No. It's mine," grinned the Wabbit, "I changed it ..."
at October 30, 2019