7. The Wabbit and the Accidental Fox 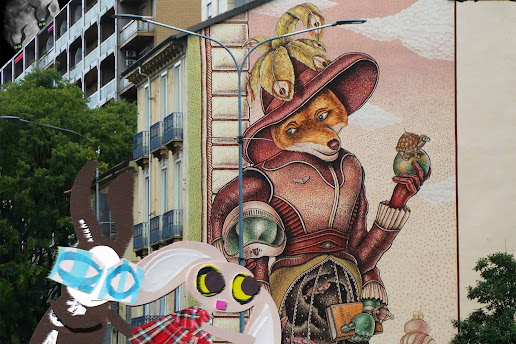 The Wabbit and Lapinette did what rabbits could do best. They ran for their lives. They scuttled down the staircase, across the courtyard, down the hill and along lonely streets. The city was a ghost. Not a soul had ventured out. But they heard the ghastly cries of Satanic pursuers chase across the roofs - and they were getting closer. Lapinette heard a voice and she slithered to a halt. It was a soft voice and it came from a wall. The Wabbit looked all round. "I can't see anyone." Lapinette looked up. "There's only a picture of a fox." The eyes in the picture moved and looked at them. "Do you need some help?" The sounds of the pursuers got louder. "Why don't you join me on this wall?" said the fox. The Wabbit punted Lapinette up and then jumped as high as he could. They scrabbled to get a grip. "Think mural," said the fox, "think popular art." They found themselves flattened against the wall as if the paint was glue. It was just in time. Their pursuers rounded the corner, their eyes gore-flecked. Cruel talons went snick-snick in the night. Fang-like teeth glinted in the street lights. The corners of their mouths dribbled blood. "Where'd they go?" said one "That way?" shrugged another. The Wabbit and Lapinette prayed they wouldn't look up. "Subway?" suggested a Satanist. "Closed," said another. "Search the block," said the leader. They melted into the night. "How long shall we stay here?" whispered the Wabbit. "Until daylight," murmured Lapinette. "Stay for breakfast," said the fox.
at October 11, 2019