13. The Wabbit and the Marching Priests 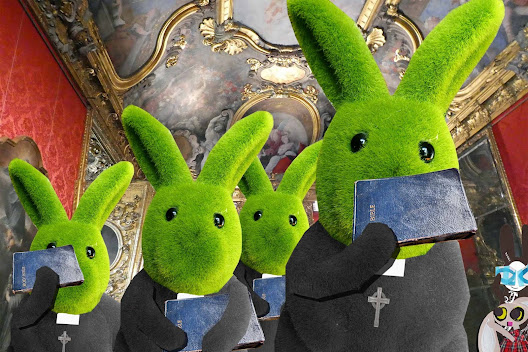 "Here we are," said the Wabbit and he pressed a remote control. Lapinette waved the Cultists in with a theatrical signal. A mirrored door opened and through it came the duplicate priests, marching as one. They waved their bibles as they marched and sang in spooky voices that the Wabbit had recorded.  "Oh when the priests! Oh when the priests!" The Wabbit joined in. "come marchin' in." The Satanists of the Rabbit Foot Cult froze, speechless. One by one they sank to their knees. The Priests came closer and closer. They waved their bibles in the faces of the Satanists like Mao Zedong waved his red book. One of the Satanists cried in a feeble voice. "All hail the Rabbit Foot Cult!" A priest whacked him over the head with his bible. Then all the priests moved forward, trampling Satanists underfoot. The Cult lay everywhere on the floor, crying for forgiveness and praising the Lord God Almighty. But the priests continued whacking until all the Satanists were silent. It was carnage. "Wabbit! You can switch them off now," gulped Lapinette. The Wabbit pressed a button and the priests stopped moving. All except for one. He smiled at Lapinette and poked the Wabbit in the ribs. "Thank you both!" He twitched his rabbit nose and made the sign of the cross. "Be seeing you!" Then he began to vanish, just like before. The ears were almost the last to go and they wiggled a farewell. Only the bible remained. The Wabbit picked it up and stuck it in his fur. "Might come in handy." "What about the Cultists' bodies?" asked Lapinette. But when they looked, they'd all but gone.. "Let's get a drink," said Lapinette.
at October 26, 2019