8. The Wabbit and Lapinette lose Grip 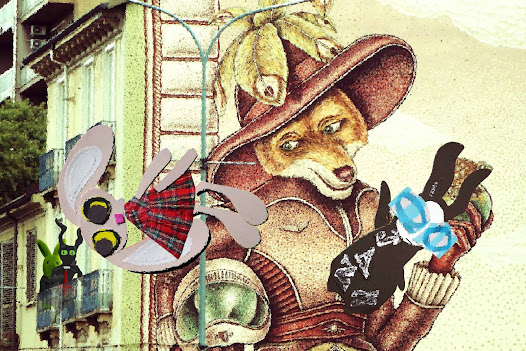 Morning came - and with it an icy frost that melted quickly in the sun. That was when the Wabbit and Lapinette lost adhesion. One second they were stuck fast and in the next they fell without warning from the wall. The fox waved goodbye. She'd been waiting for breakfast and now she was disappointed. "Yikes!" yelled the Wabbit as he span towards the sidewalk. Lapinette pirouetted gracefully down but she saw some movement out the corner of an eye. It was a Satanist, strolling onto a balcony. Lapinette knew he would raise the alarm, but as she fell she noticed something else. A green figure appeared behind him. It was the rabbit priest. She saw him grab the Satanist round the waist and then with his other paw, give him a mighty push. She heard an anguished cough as the Satanist doubled over the rail. He was about to plunge onto the road but the priest caught him by the leg and dangled him upside down for a moment. He said something, made the sign of the cross - and let him go. The Satanist tumbled onto the road head-first with a splat. The priest vanished. It was all over in an instant and Lapinette found herself on the sidewalk with the Wabbit. They stood and caught their breaths. "What did you see?" asked the Wabbit. "Poetic justice," replied Lapinette.
at October 14, 2019