4. The Wabbit and the Secret Order 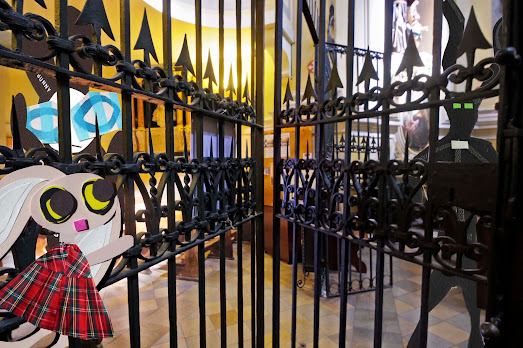 The church gates were shut and the Wabbit and Lapinette thought that was strange. They'd never known them closed. So the Wabbit picked the lock and together they dragged them apart. They were heavy and stiff. Hinges creaked like an old galleon and the sounds echoed from the roof. Lapinette's ears pricked up. She could hear something else. It was like Gregorian chanting but malevolent. The Wabbit heard it too. It made his fur crawl and he started to itch all over. "I can't make it out," said Lapinette. The Wabbit strained. Then he repeated the words. "Come rabbit with teeth of iron and claws of bronze." Lapinette grimaced. Now she could hear voices cry, "Trample all before you." The Wabbit felt in his fur for his bible. "They're summoning a daemon." The sacristy door opened and a figure swept out. The Wabbit and Lapinette flattened against the gate. "Agents of Rabbit," muttered Lapinette. But this was no ordinary agent. Its ears were Mephistophelean horns, curving and brutal. Its eyes flashed with a ghastly green glow. And as it walked across the nave its cloven feet tapped a merciless devil's jig on the church floor. It seemed to walk towards them but it turned to grasp the metal framework of the gate. There was a flickering and a flash as its cruel shape merged with wrought iron and vanished. The chanting died away. "What do we do now?" grunted the Wabbit. "Pray?" said Lapinette.
at October 04, 2019