10. The Wabbit and the Hall of Mirrors 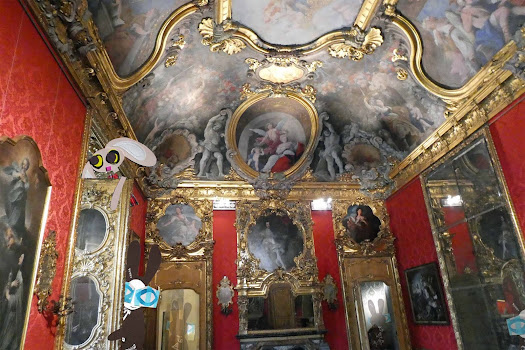 "I think we'll use this," said the Wabbit. "I never knew about this room," said Lapinette. The Wabbit wore half a grin. "No-one comes here, it's too spooky." Lapinette looked around. "Is this the Hall of Angels?" She gave a little shove and the door creaked under her. "The Hall of the Cherubim," said the Wabbit. "What about the Seraphim?" asked Lapinette. "Too much hovering," said the Wabbit. Lapinette made the door creak again. "How do you know where you really are?" "I don't," said the Wabbit, "That's why I hold onto the door." This time the Wabbit made the door creak. Lapinette giggled. "What's the plan?" "The Satanists are coming by invitation." announced the Wabbit, "They won't know where they are. The Cherubim will frighten them." "But they're only paintings, dear Wabbit," said Lapinette. This time she made the door swing wide and the Wabbit clung for dear life in case he got lost. "We'll make the paintings speak and confront their malignosity." Lapinette screamed with laughter. "There's no such word as malignosity." "All the more frightening," sighed the Wabbit. He paused for effect, but Lapinette swung the door and for a moment he found himself outside. He pushed his way back in. "When the Satanist look in the mirrors," he said, "they'll see the rabbit priest they murdered." "How?" said Lapinette. The Wabbit shrugged. "I'll make cardboard cut-outs like you see in the cinema - and attach a motor." "Ghostbots," smiled Lapinette.
at October 18, 2019