5. The Wabbit and the Rabbit Foot Cult 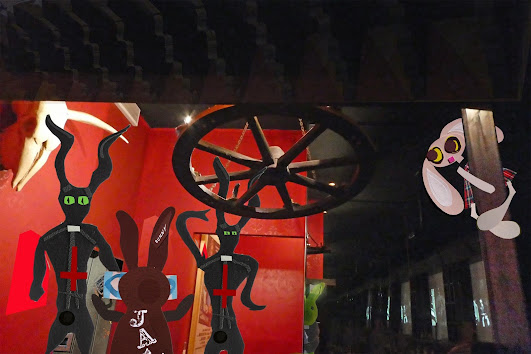 Under the church lay a labyrinth of corridors that smelled of damp and danger. The Wabbit and Lapinette groped their way with caution. They were just following their noses when they came upon a strange room. They looked around. The walls and ceiling were peppered with gloomy artifacts and all the time they could hear the chanting of the rabbit foot cult. They poked here and there but found little that looked like a clue. There were mouse droppings, a bottle opener, three cigarette stubs, and an out-of-date ticket for Black Sabbath. The Wabbit was examining the latter closely when they heard the sound of cloven hooves on the cold stone floors. There was nowhere to hide so the Wabbit gestured for Lapinette to take a vantage point. Then he stood stock still and waited. When the cultists came into the room he waved his arms. "Kneel before me!" he cried, "Kneel before the daemon rabbit." One of them made to kneel, but the other was smarter. "You don't look much like a daemon to me." The Wabbit jeered. "You'll know soon I'm the chosen one. Turn round fast and start to run." "Oh no!" said a cult member and he made for the door. The other shook his head and gestured to Lapinette. "Who's that?" Lapinette hissed through her teeth. "Je suis le reine lézard." The Wabbit nodded. "She's my familiar. She can turn you into a toad." The cultists backed away and out the door. They heard the sound of cloven hooves - running. "J'aime pas les cultistes," hissed Lapinette.
at October 07, 2019