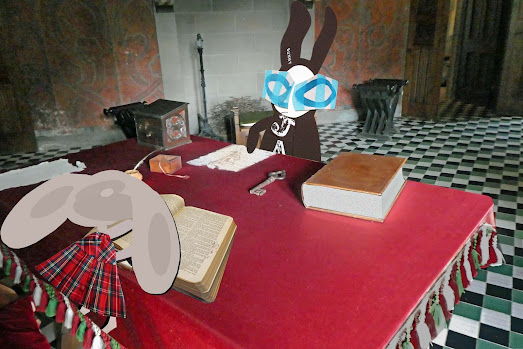 The Wabbit met Lapinette at the safe house to discuss the matter in paw. "Let me get this right," said Lapinette. "The priest came to you in a vision and asked for help?" The Wabbit nodded his head. "He wants me to find something." Lapinette sat down at the only table available. "It must be to do with his murder. He wants you to find who pushed him over the parapet." The Wabbit sighed. "I have no clue." Now Lapinette shook her head. "There is a clue. He gave you his bible." The Wabbit fished in his fur and took it out. It was well worn before - but now it looked battered and tattered. He made a face and shrugged while Lapinette leafed through it. It was a major job. It had many pages and a clue could be anywhere. "Stop there," said the Wabbit. Lapinette stopped but she couldn't see anything. "Which book are you at?" asked the Wabbit. "Judges," replied Lapinette. "Had to be," said the Wabbit. Lapinette peered closely. She saw a drawing of a skeletal rabbit's foot in the margins and she pointed at it. The Wabbit yelped and shook his paw. "Wow that was sore!" He looked down at the desk. On the tatty piece of blotting paper where his paw had rested, the drawing reappeared - and just as quickly faded. It vanished from the bible margins too. They looked at each other. "What's afoot?" grinned the Wabbit. Lapinette groaned. "This has all the signs of a cult." "What kind of a cult?" said the Wabbit. Lapinette snorted. "A secret one of course."
at September 30, 2019