6. The Wabbit and the Vole's Goal 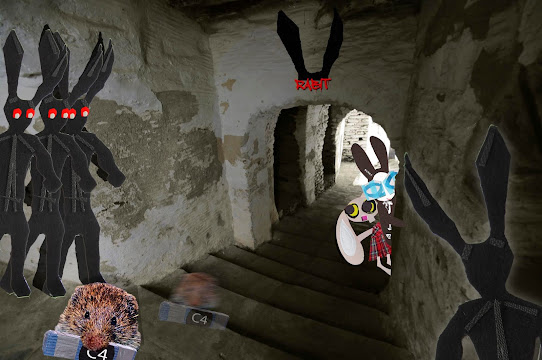 It wasn't far to the Agents' lair. The vole gestured to the cave. "The awful creatures are in there, I can smell them." The Wabbit and Lapinette hung back. "Leave this to us, vole," said the Wabbit. He dug deep in his fur and fished out a largish quantity of explosive. Lapinette grabbed it and inserted a detonator. She was about to throw it down the cave but the vole snatched it. "I'll do it!" He was off before they could do a thing. He scampered up the stone steps and into the shadows. It was then they discerned sinister shapes that could only be Agents of Rabit - and they were much too close. Lapinette drew a breath. The Wabbit clenched his jaw. What happened next took place at lightning speed. With the package of C4 under its snout, the vole reached the top of the stairs. He scraped his claws along the top step. The sound set everyone's teeth on edge. "What's that?" yelled an Agent. "I'm only a vole," snickered the vole. "It's only a vole for goodness sake," said the leader. The vole scampered past and behind them. "Stupid problem pest," grimaced an Agent. The Vole dropped the explosive just behind him. "What the ..." shouted an Agent and he reached out - but it was too late. The vole was a blur as he scampered back. He shot past Lapinette, executed a speedway turn and let out a snicker that echoed down the cave. The Wabbit reached under his fur for the wireless detonation switch and yelled. "All clear! Fire from the vole."
at July 18, 2019