10. The Wabbit and the Stowaway Vole 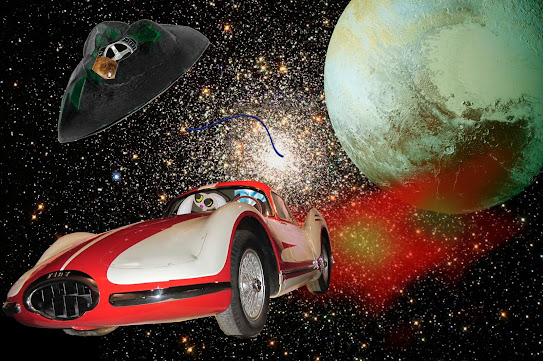 The Wabbit and Lapinette made a deal with the Vole and they departed with the Agents' craft in tow. But as they broke free from the planet's atmosphere they felt the towline tug sharply. Then it happened again until finally it snapped. "What gives?" said the Wabbit. Lapinette watched the towline dangling in space and she pointed. "It was perfectly secure," groaned the Wabbit. "The rope was. But look!" Lapinette pointed to the enemy craft's porthole. The vole stared out with a toothy grin and he waved. Gradually the craft picked up speed and disappeared behind a nearby planet. The Wabbit was furious. "What about the communications equipment?" Lapinette shrugged. "I disabled everything." The Wabbit struck a paw against the steering wheel. "Have a care, Commander," said Turbina, "That's new from the motor accessories shop in Via Garibaldi." The Wabbit's fur steamed and he stared at Lapinette. "How did you know?" Lapinette grinned a very wide grin indeed and kissed the air. "Never ever trust a vole. Especially one that vole-unteers." The Wabbit disregarded this and looked into space. "Where's he going?" "He's going nowhere," laughed Lapinette, "He'll run out of fuel soon." The Wabbit started to laugh. His shoulders heaved and his side split and he couldn't stop. "What's so funny?" said Lapinette. The Wabbit gave a last chuckle. "The Vole Patrol will pick him up."
at July 26, 2019