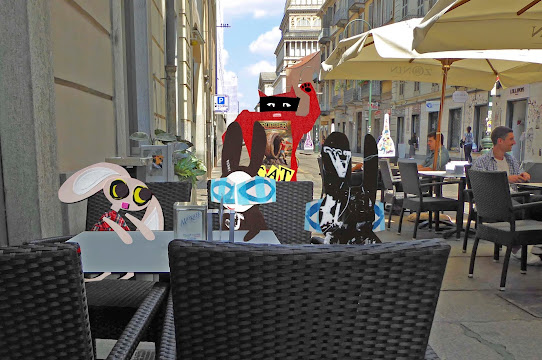 The sun was so bright it bleached the street - so the team found a caffè in the shade and scrunched in. Skratch made a late and fashionable entrance as usual. "Well hello everyone. What sort of adventure did you just get yourselves into?" Wabsworth was the first to comment. He looked directly over the table at Skratch. "It was a no reason kind of adventure. Despite its folk pretensions, it defies categorization." Skratch grinned a mighty cat grin. "That's very critical, Wabsworth. You surely didn't think it was silly." The Wabbit chimed in. "Perhaps it was. But that's not entirely negative. The adventure critiques the story-telling process itself." Lapinette giggled and beat a rhythm on the table. "I think it was wonky intellectualism of the highest order - Arabian Nights for the very highest of high brows." Skratch meaowed. "It was the anti realist nature of the story that rendered it as magical realism. The Wabbit and Wabsworth were arrivistes as much as Aladdin and Sinbad. But this version is as authentic as any ancient Arabian tale." Wabsworth chuckled. "My point exactly. Instability. Entangling displacement. Repetitive motifs." Lapinette laughed. "The story is a folk tale. The tyre is a ring. A ring means a wedding." "With this ring I thee wed," said the Wabbit. He made a circular movement with a paw - and said gravely, "Hoc est corpus meum." "Hocus pocus!" yelled Skratch.
at July 01, 2019