1. The Wabbit and the Swift Pick Up. 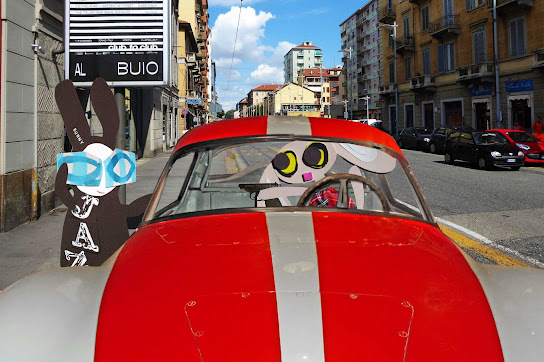 The Wabbit strolled down Via Nizza with hardly a care in the world, when a fast car mounted the sidewalk and a beautiful rabbit leaned across with a gun in her paw. He'd been wondering about his next mission, but not that hard. "Get in the car," snarled the rabbit. He raised a paw in the air and drawled, "Lapinette, that looks like my gun." Lapinette twirled it round several times and offered it butt-first. "I cleaned it up and replaced the safety catch." The Wabbit shrugged, took the gun and got in the vehicle. "Hello Commander," said the car. Turbina held an impossibly high rank at the Department of Wabbit Affairs. She could talk and fly. And she usually kept a salad sandwich in her glove compartment for the Wabbit, just for a culinary emergency. "I have your orders," said Turbina, "but let's take a little drive first." Lapinette put her foot on the gas, then gunned the throttle and hauled up the handbrake. Turbina swerved through 180 degrees and took off in the direction of the centre. The Wabbit clung on for dear life. Lapinette eyes gleamed and she span the steering wheel. Turbina took a left at Corso Germano Sommeiller on two wheels and briefly left the ground as she flew over the railway bridge. People jumped out the way. "Are we in a hurry?" asked the Wabbit. He tucked his automatic in his fur and peered in the glove compartment. Turbina and Lapinette laughed together. "Just practicing."
at July 04, 2019