9. The Wabbit and the Alley Altercation 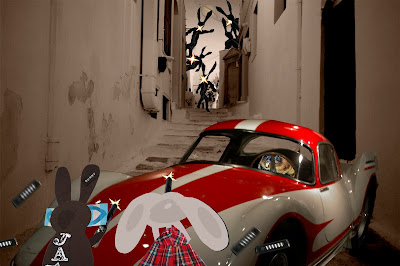 The Agents of Rabit were just too stupid or too careless. They cavorted into the alleyway laughing and joking - only to be met with a hail of bullets. "Just wing 'em Lapinette," said the Wabbit. "We want them to tell the tale." Lapinette picked off another Agent, then pushed an extra clip into her automatic. It was fast and furious. Inside Turbina, the vole relaxed and increased the volume on the radio. But then he thought of something and pushed his head out the window. "What about my cut?" But the Wabbit and Lapinette couldn't hear him. Agents bit the dust. "What about the communications equipment?" shouted Lapinette. "It must be in their craft. We'll take it!" yelled the Wabbit. "Can you fix it?" grimaced Lapinette. "I can fix anything," murmured the Wabbit, ".. given time." Lapinette laughed and fired. Another Agent toppled from the rooftop with a cry. It was the last. Turbina started her engine. Bricks toppled from rooftops. The vole shot in the air with surprise as the Wabbit and Lapinette jumped in. "Confiscation time," grinned the Wabbit. The vole snickered and settled between the two of them. "I'm sure that craft is full of succulent roots." If you say so," smiled Lapinette. The blast from Turbina's jet scorched the buildings as she stood on the gas.
at July 25, 2019