7. The Wabbit and the Half Kaboom 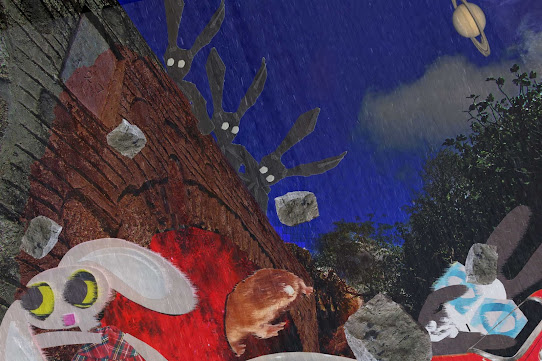 There was more than enough explosive - and when it detonated the blast was significant. "Too significant," yelled the Wabbit as his paws left the ground. Lapinette scampered to the left and behind the stonework, but the Wabbit had no choice, He was thrown to the front and the vole quickly followed. Rocks fell all around him but he managed to glance back. The missiles weren't from the explosion. Three Agents of Rabit stood on the parapet, showering them with every stone they could find. It wasn't high tech ammunition but it was effective. "Regroup," yelled the Wabbit. He feinted to the left, rolled and found some cover. The vole rolled too and landed on top of him. "Where did they come from?" shouted the Wabbit. "Must be a second unit," snickered the Vole. Lapinette took a makeup case from her fur and carefully applied various cosmetics. "I hate this rain," she pouted. The rain got heavier and they sheltered as best they could. The Agents hated the rain too and it frustrated their efforts. A bit of moaning floated over the parapet. "Let's go back to the mother ship," said one. "Then we'll come back and mop up." "Achoo," sneezed another, "my paws are all sore from these rocks." "I need an aspirin," said another. The Wabbit grinned and then he grinned again. Turbina's hood appeared out of the rain. "I have hot chocolate," she breathed.
at July 19, 2019