5. The Wabbit and the Interrupted Circuit 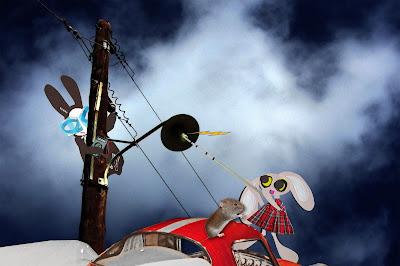 The rain gave way to steamy night. Under heavy clouds, the vole led Turbina to what looked like a roughly wired street lamp. "This is what these rabbits erected," he said. The Wabbit climbed the pole and subjected the circuit to an interminable series of tests. "Well?" asked Lapinette. "It's not a lamp, it's a transmitter," said the Wabbit, "and it's a lot more powerful than it looks." Without warning, the array became hot and started to hum. "Yow!" said the Wabbit, "that made my fur tingle." "Mmmm. Let's see," said Lapinette. She fished under her frock and brought out an expandable pole. "Are you going to poke it?" asked the vole. "When in doubt, burn it out," said Lapinette. She poked the array with the pole. Nothing happened. She prodded all around with no results. "Poke it in the middle," said the Vole. Lapinette poked it viciously. There was a flash and a crackle and something arced. Sparks flew. The humming stopped. "That'll keep them busy for a while," laughed the Wabbit. Lapinette folded the pole and jumped to the ground, followed by the vole. Slivers of wood flew around as the Wabbit slid down. "Now I'll take you to their lair," said the vole. "They have a lair?" smiled the Wabbit. "Doesn't everyone?" grinned the vole.
at July 15, 2019